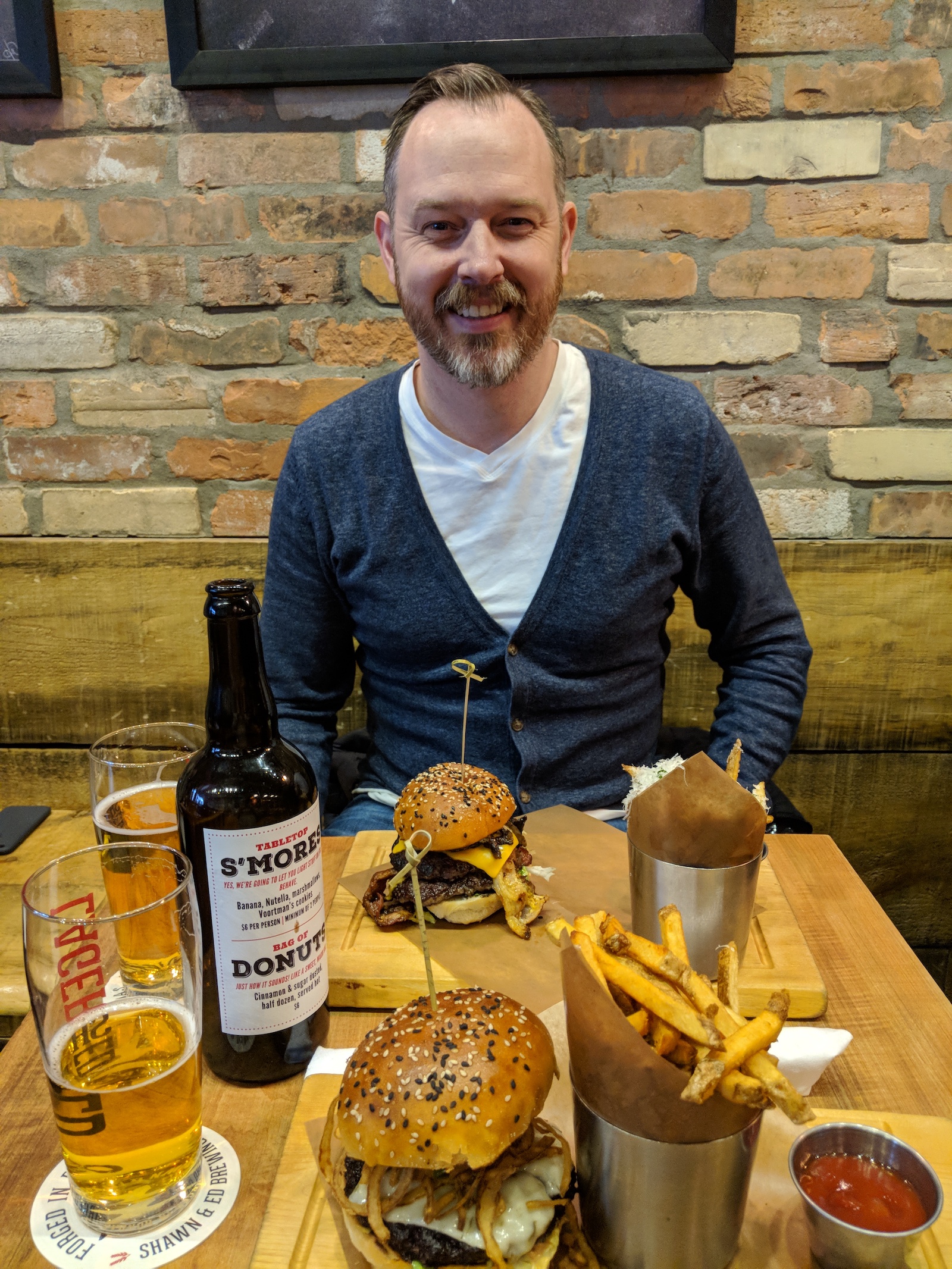 For this session of Lunch’Ed, I met up with Mark Dodgson to discuss the evolving role of User Experience and the value in using evidence-based design to achieve business goals.

Our meeting took place at a restaurant in downtown Hamilton aptly named HAMBRGR.  Their goal is to make the best damn burger you’ve ever eaten, and I think they may have succeeded. Mark chose the El Diablo burger for me which packed some heat (but not overpowering) with a side of Gar-Parm French Fries. To help cool things down, he also ordered what is now one of my new favourite beers, the LagerShEd, which comes from the Shawn and Ed Brewing Company, a microbrewery just down the road in Dundas.

I first met Mark about six years ago through hockey. We immediately hit it off once we discovered our mutual interests in web design and development. We have learned a lot from each other over these past few years and have even colluded on a few projects. (Well, I’ve learned a lot from him. The flip side is somewhat presumptuous of me.)

I was eager to hear Mark’s story on how he entered the industry, as this has proved to be one of the most intriguing parts of these lunches so far. It is rarely a straight path, especially within the web industry. Mark didn’t start out with a goal of landing a job in UX. The role didn’t exist back when he was in school.

Mark entered into the Advertising and Media Communications program hoping to one day land the job of Art Director at a fancy advertising agency. That quickly changed when Mark discovered computer design. Having never even owned a computer before, he found that his one class a week on the early Macs using Quark XPress quickly took centre stage. So much so, he found it was the only thing he wanted to do.

“I would skip classes to stay in the computer lab, just to design things!”

Once he completed school, he immediately took up an offer to be a junior designer at an advertising agency and then that was it, he never looked back. Computer-based design changed his life.

His first job wasn’t always that great though, and Mark led into a little story about why he loves listening to Jazz when he works. While the art director he worked for was a great mentor from a technical standpoint, he was, as Mark puts it, a horrible and verbally abusive person. They would fight and argue constantly. The only times Mark knew he wasn’t in trouble was when the art director was “in the zone” playing Jazz music in his office. To this day, Mark now listens to a lot of Jazz music when he is working.

“So now every time I hear Jazz music it’s the only thing that calms me down.”

So is conflict natural in the design industry due to the passion involved in a creative industry? Mark’s take was that while it may have been at one time, the industry has certainly changed. Especially the web industry in particular. Thanks to Agile development and fail fast thinking, the industry as a whole requires everyone to be much more collaborative now.

During his time as a designer, he came to realize the growing importance of user experience. As an industry, we were building websites that just didn’t work but it didn’t matter at that time because no one was thinking that way. That thought process led him into the field of user experience and eventually took him into his current role as UX Director for Bluespark, an enterprise-capable open source development agency.

Getting back to his current role, I was eager to learn how he balances sound UX principles over a client’s direction on design. Mark agrees that this is a big challenge, and as he put it so eloquently, it all comes down to evidence. They enter any project with success metrics and then use sound testing methodologies to back up the design choices they are presenting. Their goal is to create designs which show through data to achieve the objectives set forth by the client. While they may not always accept the outcome, in most cases the results speak for themselves.

“They are hiring you for a reason, to make recommendations, and you earn their trust over time.”

UX is a relatively new field within the industry, and with it comes some growing pains. While most other areas of discipline, such as graphic design and software development, have well-defined programs and courses, there isn’t a College of User Experience regulating the industry. As such, the title is sometimes carelessly thrown around and assigned, specifically within a client’s organization.

“It’s a new industry, and we are still trying to figure out what titles are and what it means to be in user experience, what we are supposed to be measuring, and how to align designs with goals and business objectives.”

Even within design schools, students rarely understand the breadth of choices they face once they enter the industry. Mark will talk to students who believe they are going to leave school and design logos or brochures for a living, but as he puts it that is such a small part of the industry right now. That led to a separate discussion regarding the commoditization of design (and development) that both our industries face right now. With the advent of services such as Fiverr, Mark feels that the idea of designing a logo for five dollars devalues the entire industry.

“In reality, a good logo is going to take five to ten hours, and plays into the overall branding.”

So given the current commoditization, is the future bleak or bright for upcoming designers? Where is the opportunity for designers going forward? Mark believes it’s in the area of user experience and results-driven design. The tools available today allow for everything to be measured and analyzed in a way which just wasn’t possible just a few short years ago. Design is no longer just about making things look good; it’s also about achieving measurable results. As an industry, Mark believes there are more job opportunities now than ever before.